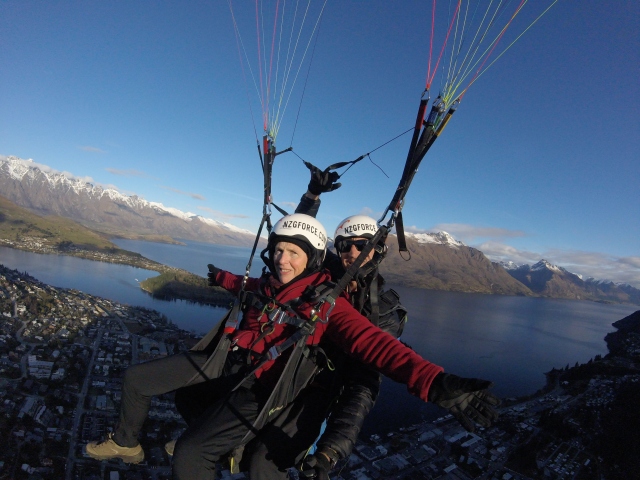 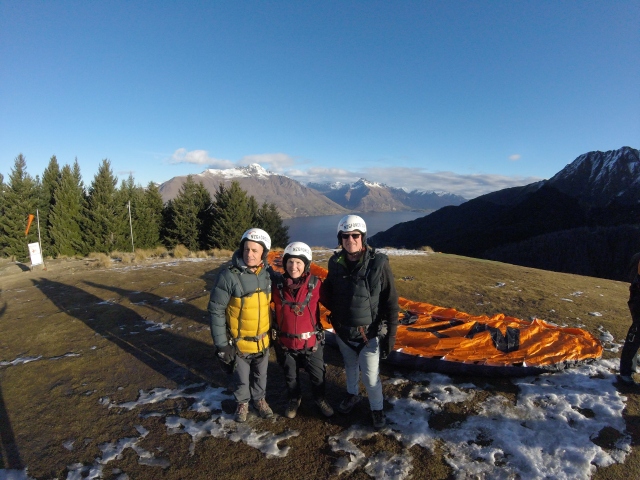 7am and it was pitch black with no features discernible at all outside. Gradually dawn appeared from behind the mountains opposite the lake – yes, accommodation called “Lakeview” with both a lake and a view! -and Gary and I prepared for an early start.

Ron ran passed the picture window, we packed the car, and then set off on foot through contemporary residential architecture of mixed appeal in a northerly direction until joining the path that edges Lake Wanaka, and then we turned towards the township.  New units being built with a price tag of 1.7million+

Very crisp morning and as the sun lit up the snow it became a spectacle.

We chose Alchemy for coffee and texted Christine and Ron who arrived with the car.  The view from the curve of the lake with the snow covered mountains on two sides was unsurpassed.  Together we continued the stroll along the lake before parting to entertain ourselves.  All roads led back to the shops we’d seen the night before – a mix of ski shops, restaurants, and classy “Made in NZ’ shops.  A bit of retail therapy…

In the car by midday and Ron chose a route that took us to Queenstown via Cromwell.  How good was that!  The drive had straight sections, moderate ups and downs, and bendy bits with the now familiar sections under repair:  no road kill.  Cromwell is the furthest inland point in NZ (119kms from the sea) and sits alongside the man-made lake Dunstan and is nicknamed ‘the fruit bowl of the South’.  Fruit trees and vines of all sorts lined the highway; the lake was a mirror; mentally, Ron re-settled.  We stopped to view the historic centre – one street of buildings that looked like they could be a film set for a Western – housing Arty shops, rusted farm and gold mining relics, crafts and refreshments.  Ron and Christine made a beautiful purchase.

The final push to Queenstown and a decision was made to ride the gondoloa first as the perfect day might never be repeated.  Deidre took us straight there, Ron jagged a car spot immediately, and we’d bought tickets to ride the steepest cable car lift in the Southern Hemisphere.  Yes, it was steep, very steep and a moment of slowing down mid trip was of concern, but ultimately uneventful, and we rose the 450 metres without incident to Bob’s Peak and were rewarded with amazing views over Queenstown and the surrounding peaks – Coronet, Walter & Cecil, and The Remarkables, and the waters of Lake Wakatipu.

Ron, Gary and I made a life changing decision – to paraglide…  Christine sadly was heavily congested and recovering from Wednesday’s migraine so couldn’t fly, but offered us cautious best wishes.

To fly, one must have a launching pad high above natural and man-made features, and it was a climb.  Our flying partners – a French woman, Clem (?), Dan and Dom, walked with us laden with the equipment weighing 20kgs or so and at a half way point were able to load a motor bike with the three backpacks. Ron almost ran up the slopes, with Gary struggling the most and mumbling about the extra weight he now carries, but with stops we made it to the snow line and it was all action from that point.

They unpacked their gliders and untangled the lines.  Gary was harnessed first; the ‘seat’ hangs down like a nappy falling off, but it looks secure and safe.  Clem was getting her gear organised and I was waiting for Dom to return from driving the bike down the mountain and then running up it…  Gary and Dan flew.  Wow.

I expressed my nervousness to Ron who probably didn’t hear as we were some distance apart so when Dom reappeared I shared my feelings with him.  Ron and Clem flew.  Wow #2.

Instructions – walk a few steps (let’s be clear, the edge of the mountain was just a few steps beyond those steps), Dom would check the paraglider, then commit (or not), run a few steps then it was bye bye mountain.  I pictured myself in a cartoon (after the event) as I contributed nothing to the walk and run instructions as my feet didn’t touch the ground at all once the wind filled the glider.

We three have our own telling of this adventure, but in summary, the euphoria and reliving of the experience kept me awake all night.  It was sensational.  All three of us would do it again without hesitation.  Did I hear Ron mumbling about learning how to do it solo…?

Christine rode the gondola solo, and almost ‘back to earth’ we reconnected and found our accommodation (in Melbourne street, off Sydney street).  Hung the coats, opened the suitcase, cup of tea, and out the door to get our bearings.

The town was alive; great vibe.  3 paragliding discount vouchers reduced the fish and chips dinner bill at Finz, where we sat in a courtyard, warmed by overhead gas burners and blankets.  All smiles.  Into this shop and the other – outdoor clothing gear and souvenirs – and a trek up the hill to home for two nights.

One thought on “Day 9 Wanaka to Queenstown”