Today was the final rehearsal of the Verdi Requiem with a full line up of soloists, orchestra and chorus.  The start time was delayed by 45 minutes to allow for rehearsal of the new soloists.  We met up with Nadeena and Marie firstly in the Palau’s eating area and then across the Carrer de Saint Pere – the pedestrianised and vehicular lane way immediately outside the Palau’s main entrance  – and I marked up my score with ‘Sits & Stands’ which had been discussed at the very end of Friday’s rehearsal.

And so at 11am we heard the replacement tenor, Hungarian, Laszlo Boldizar in ensemble with the original soprano, Iwona Sobotka (who had performed in WA in February), the replacement mezzo Agniezka Rehlis (who we would hear again in Berlin at the Komische Oper) and the bass we heard on day one, Francisco Crespo , who replaced the bass printed in the program as he withdrew due to illness.

It was an unsatisfying rehearsal for choristers as much of what we sing wasn’t rehearsed – and the rehearsal finished early (noting it started late).

But the day was exquisite and we took advantage of the early finish and assembled straight away in the courtyard and did a pop-up performance of Matthew Orlovich’s My Nurse and I on the tiered section.  Our blue platypus folders sparkled and the choristers excelled.  There was huge applause when we finished as the courtyard was packed with choristers who chose to exit the Palau via the courtyard.  Unbeknowns to me, Simon Halsey was also in the courtyard, and he spoke to us afterwards.

From singing to seeing and sipping, and a group of us headed to the top of the building with ‘eyes’, sat by the pool with a jug of cava, and thought life was pretty good.

From here Gary & I got our first good view of the Sagrada and the city skyline.

A bit of random exploring followed, a fabulous salad for lunch,

and chance meeting with Tony & Gill and icecreams, home to change into performance mode, and then back to Palau for the 5pm performance.

The foyer was a press of people as choristers (not ours) had forgotten their tickets,  friends had the wrong tickets for entry, some of the scanners weren’t working and everyone was stressed.

Climbed closer to God for our audience seat (curiously as hot as hell though) ; the performance was thunderous at times and intimate at others.  The timpanist and bass drummer in the Dies Irae were appropriately energised and dramatic, and the soprano’s pppp top Bflat in the Libera me section was perfection.  The combined sound of all forces in all dynamics was clear and rich and the superb soprano and mezzo soared above the 1300 choristers. 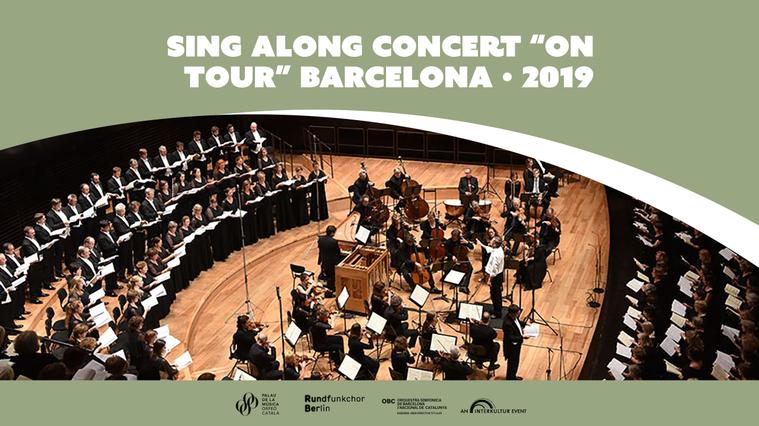 On stage left were the Rundfunkchor men with the Catala men on stage right.  The women of these professional choirs were positioned in the three rows much higher up and in their two groups separated by the organ pipes.

The 1300 choristers occupied the downstairs area, the first balcony and some of the second level boxes as well.  Sight lines for tenors & basses on the floor were excellent , but horrendous for any woman beyond a front row upstairs.  The audience filled any gaps, but mostly in a central block at the very top.

Post performance we all gathered in a Turkish restaurant close by; Simon Halsey popped in to say ‘hi’ and congratulate us for what we do, and to express his wish to work more in Australia.  The night was young and even when it was old, Spaniards were still out and about.